The 2016 Diocesan Convention opened with worship on Friday, November 11, in the Chapel at All Saints’ Episcopal School in far west Fort Worth. The Rt. Rev. David Rice of San Joaquin was the preacher. The offering of $1,273 in plate and two online donations was designated for at-risk children. After worship, there was a social hour, followed by dinner (and some foolishness), and then a brief opening business session.

Prior to worship on Friday, many convention goers attended a training led by the Rev. Canon Eric Law of the Kaleidoscope Institute. Three other workshops were well-attended on Saturday after lunch.

On Saturday, delegates gathered in the school gym. They heard the bishop’s address in which he reflected on the ways the Episcopal Diocese of Fort Worth is “on fire with the Spirit.”

“…people have noticed that, ranging from your communities to the wider Church … I want to make an important point: all the recognition our diocese is receiving, and all the funds that are coming our way, are because of the work that is happening and the risks you are taking day by day, week by week, month by month, year by year. Each and every one of our congregations has risked something new in the past couple of years. Some things have worked well. Some things have not, but when they don’t, you try again or you try something else.”

He talked about what Bishop Jeff Lee of Chicago had described as qualities of thriving congregations in the commencement address at the Seminary of the Southwest.

“Three things in common, three things that stand out: each congregation has clarity about its identity, knowing who they are and what they are about; they tend to talk about the things that matter; and they have heart.”

“I see these three things in you. This diocese is developing an identity rapidly (not simply who we are not, but who we are), and every congregation has at least some sense of what you are about. More and more you are talking about the things that matter. Now, it’s true that Episcopalians are going to argue about the napkins. Getting the napkins right is an expression of hospitality. So, I would be less than honest if I didn’t report that I hear a little of that. If it isn’t the napkins, it’s the vestments. But, you ARE engaged in deep conversations about things that matter – just look at the type of speakers you bring in for diocesan workshops. And heart? God knows you have heart – especially a heart for those on the margins,” he said.

Later delegates passed two resolutions in response to the address.

Whereas, we recognize with gratitude God’s active work through the people who gather as the Episcopal Diocese of Fort Worth;
Therefore we commit ourselves individually and communally to bucking the trend of religious decline by;
Being crystal clear about our identity as congregations and a diocese committed to valuing all the people of God;
Having conversations about the things that truly matter; not the color of the carpet but by bringing good news to the poor, sight to those who don’t see, and freedom to the oppressed;
And risking ministries which embody a heart and passion of death defying love of God through Jesus the Christ.

Whereas, after eight years we still find ourselves in the place of uncertainty, wandering like Hebrew peoples in the desert, the Holy Spirit continues to lead us forward, not backward;
Therefore, we recommit ourselves to being a Resurrection Church, not living for ourselves but for Him who died and rose for us, actively seeking, arms wide open receiving, and living out the life of the Holy Spirit on the Way, plunging ourselves into the nature of God, thereby changing ourselves and the world, trusting God in spite of all the evidence, then watching the evidence change.

The planned online voting system, despite months of extensive pre-convention testing, developed a glitch that resulted in voting by paper ballots. Delegates worked patiently through elections for General Convention deputies and alternates, at-large members of Executive Council, two new members of the Standing Committee, lay and clergy members of the Disciplinary Board, and a lay trustee to the University of the South. View a tally sheet for our elections.

The convention was rich in bishops, with five in attendance — Bishop Mayer, Bishop Rayford High, and Bishop Sam Hulsey of Fort Worth; Bishop David Rice of San Joaquin, and Bishop Gary Lillibridge of West Texas. Bishop Lillibridge accompanied his wife, Catherine, who presented a workshop on Open Table.

Delegates passed a table of assessment and a budget that allocates 9 percent to charity, with a goal of reaching 10 percent of the budget by 2018. Read the budget-related resolutions.

The Convention also passed a resolution from the Standing Committee regarding training to promote racial justice and reconciliation:

Resolved, by the 2016 Annual Convention of the Episcopal Diocese of Fort Worth that the Executive Council of the Diocese take expedited action to make available and to determine funding sources to provide reasonably convenient opportunities for all Church Officials to take training which promotes racial justice and reconciliation in the Diocese by June 1, 2017; and

And such that it WILL NOT

The source of this training will be a respected trainer, using up-to-date resources, such as Cross Roads, Vision, Kaleidoscope, or other such resource; and

Be it further resolved, that the Executive Council report to the Convention Delegates and Clergy of the Diocese no later than November 1, 2017 the progress made on training Church Officials in the Diocese as required by the Church and Diocesan policy.

One of the most striking exhibits at convention was the Shower of Stoles, sponsored by the newly reforming Fort Worth Chapter of Integrity.

The Shower of Stoles is a collection of more than a thousand liturgical stoles and other sacred items representing the lives of gay, lesbian, bisexual and transgender people of faith. Each stole contains the story of a LGBT person who is active in the life and leadership of their faith community in some way: minister, elder, deacon, teacher, missionary, musician, administrator, or active layperson. Stoles of the Rev. Lauren Gough, who died this year, and the Rev. David Tarbet, brother of the Rev. Bob Tarbet, who also died this year, are being added to the collection.

And she acknowledged those in the discernment process for ordination:

After convention adjourned, the Standing Committee met briefly and elected as president the Rev. Amy Haynie, Trinity, Fort Worth. Because this was the first time Convention was electing members at-large of Executive Committee, the newly elected members met to drew lots to determine their terms. See a chart showing terms.

Sometimes the story of Convention is told well through photos. Please click or swipe through gallery photos of Friday and photos of Saturday. 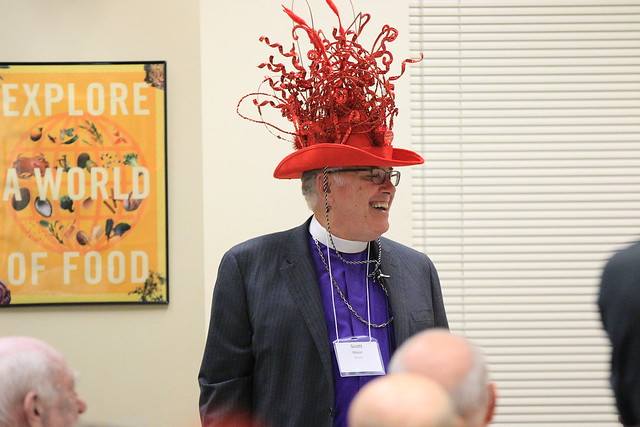 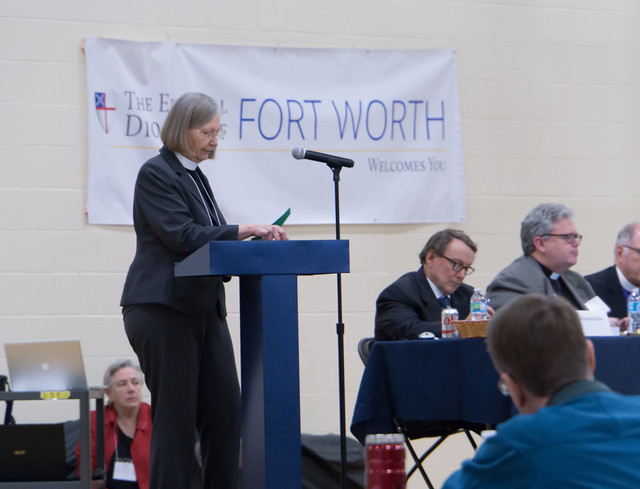 Previous
Fiery foolishness
Next
Dedication and consecration of historic building